A year after going out on top as a Grey Cup champion, Henry Burris is staring down a new rival. This one doesn’t wear shoulder pads or chase the former CFL quarterback out of the pocket. These days, one of Henry’s biggest challenges comes in the form of a glazed donut.

As a CFL QB, Henry counted calories and hit the gym hard. Then he retired and things changed. “Now I can enjoy whatever wine I want, whatever beer I want, whatever food I want,” Henry says. “All these things that I got to enjoy every now and then I indulged in for at least six to eight months (after retirement).”

When the glazed donuts turned into a glaze over the abs he’d worked so hard on throughout his 17-year CFL career, he knew he had to get back on track.

But there were other challenges besides food and drink. Like many guys, Henry juggles a challenging work schedule. He’s up at 3 a.m. to make his way to the CTV studios in Ottawa, where he co-hosts CTV Morning Live. He also has to squeeze in the work he’s done this season with TSN’s CFL broadcasts.

There’s no way Henry would let the donuts and the daily grind win. Here, he shares three easy ways he, and any guy, can fit exercise into a busy week.

Find something you love to do

Henry has scaled back his two-hour-plus daily workouts to an hour or so once or twice a week. He did this in part because of his busy schedule, but also because he has discovered a new workout he loves: Muay Thai training, which combines elements of a Southeast Asian combat sport with straight-up cardio. “I’ve had a great time doing that because it really works the cardio and it gets you in great shape in a different way,” he says.

Henry did some kickboxing training when he was playing. When he met with some Ottawa-based professional Muay Thai fighters this past year, he joined them for training.

“They invited me to come in and do some sessions and the next thing you know it was a match made in heaven. It’s something I really enjoy, I love it,” he says. 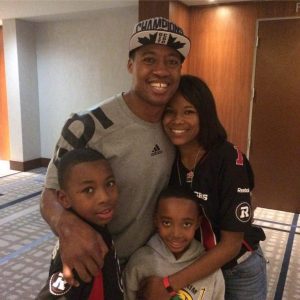 Henry’s entire family is now into Muay Thai. His wife, Nicole, and his young sons, Barron and Armand, all take part, too. “At home when the kids don’t have anything to do I’ll get them downstairs,” he says. “I’ll get out the punching bags and I’ll get the handbags that I have and I’ll throw some gloves on them and allow those two to just get after it and let off some frustration or whatever it is they need to do as well.”

Inspire others to lead healthy lives

Henry and Nicole want to live as healthy as possible, in part to set a good example for Barron and Armand. Nicole “was an all-American lacrosse player at Temple and it was very important for both of us to continue to challenge each other and maintain a healthy lifestyle,” he says. Henry’s sons, meanwhile, “have seen me over the years training my butt off and they’ve seen my wife go to the gym. When kids see their parents taking on something and having a passion for it, it brings them closer to it and it makes them want to become a part of that.”

You know what else brings families together? Watching the big game! If your crew is looking for something to snack on, we’re serving up healthier versions of your favourite game-day recipes that don’t sacrifice taste. They’re so easy to make, even the ref could do it! Get the recipe ebook here from DontChangeMuch.ca.

Inspired by Henry’s story? Click here to read three easy ways to get into the best shape ever on DontChangeMuch.ca.