The Canadian Men’s Health Foundation team can’t stop talking about Grey Cup 2017. It was a heck of a game, no doubt, but for us the build-up to the main event was just as thrilling.

“With more than 3M Canadians reached over the course of our campaign, we took a big step towards inspiring men to live healthier by embracing small changes that will benefit their families and community,” said CMHF vice-president Jeff Nesbitt. “I would like to join the rest of the CMHF Team in thanking everyone involved for making our innovative Grey Cup initiatives so successful.”

Here are 10 awesome highlights from this year’s Grey Cup campaign:

1. Game time
Cassondra McCrory, the newest member of our team, was thrilled to attend her first pro football game. And what a game it was: “It was just such an awesome all-Canadian experience,” she said. “There was a sheet of snow coming down non-stop, people out on the field shovelling between plays, and Shania Twain performing at halftime. Wow!”

Not only that, McCrory got to sit with our National Champion and two-time Grey Cup winner Shea Emry, who explained the Xs and Os after he delivered a deafening rendition of O’ Canada. “Singing the anthem with that many people was phenomenal, and after that the game just got better and better!” McCrory recalled.

2. CFL legends listen up
Emry did much more than explain plays and sing his heart out. On the Friday before the big game, he delivered an inspiring speech to hundreds of fans and their idols at the CFL Alumni Association Luncheon.

“We want men, women, and families to understand that improving the health of men doesn’t have to mean giving up all our cheat days or running marathons. In fact, you don’t need to change much,” Emry said.

CMHF also played a series of commercials from our Don’t Change Much campaign during the luncheon, all which got plenty of laughs from the crowd. “It was a perfect audience for what we’re doing,” McCrory said. “There was this positive energy, and this sense of easy-going fun, that really fits in with what Don’t Change Much is all about.” 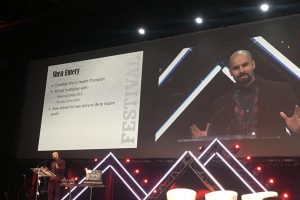 3. Canadians football fans unite
It was amazing to celebrate Canada’s 150th Birthday at Grey Cup, along with thousands of fans from across our great nation. Even Prime Minister Justin Trudeau and his family were watching in the stands! We had the privilege of meeting Minister of Environment & Climate Change Catherine McKenna, CBC Sportscaster Brian Williams, and the CFL Commissioner himself Randy Ambrosie!

4. Shea Emry’s Instagram takeover
As Cup festivities got underway, Emry took the controls of @DontChangeMuch. “I’m stoked to be taking over Don’t Change Much this week,” he posted. “It’s my old squad the @torontoargos vs @calstampeders in a 2012 Grey Cup Rematch! Which side are you cheering for!?”

Emry also shared one of his best tips:

💪 Your secret weapon against the worst hangover ever!!! Ready for this? You’re going to love it! Beer, water, beer, beer, water, water, game day is all about balance right?💧🍺 Step up your game by having a few, and not a few too many. #dontchangemuch #menshealth #greycup #beer #water

5. CFL greats share healthy tips
Emry wasn’t the only former player to jump on the Don’t Change Much express during Grey Cup week. In case you missed it, check out the amazing CFL alumni and their great health tips on our microsite at DontChangeMuch.ca/CFL! Here are two favourites:

Parlez-vous francais? Their health tips are available in French too at ChangePasTrop.ca/LCF! 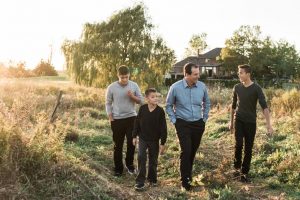 6. Easy & Healthy Game Day Recipes eBook
Hundreds of guys downloaded our free recipe eBook, which serves up healthier versions of your favourite game-day recipes that don’t sacrifice taste and are so easy to make even the ref could make them. If you didn’t get your copy, download it here!

7. CFL Swag Giveaways
But wait, it gets even better: Everyone who downloaded the recipe eBook was also entered to win one of 10 amazing CFL prize bundles including an official signed CFL football and other sweet stuff. Click here to find out who won on DontChangeMuch.ca! 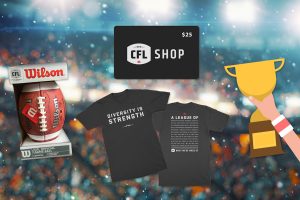 8. Grey Cup a good time to talk about men’s health
To officially mark the partnership between the Canadian Men’s Health Foundation and CFL Alumni Association for the 105th Grey Cup, we published a “Canadian Football Players Put Their Shoulder Into Men’s Health” press release to our websites. 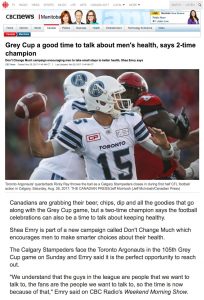 10. Supporting Partners
A big thanks to the CFL, CFL Alumni Association, and Driver Check for helping us to amplify these health tips to inspire fans across the country!

It was an exciting Grey Cup in Ottawa this year and the CMHF Team can’t wait to experience the showdown in Edmonton in 2018. See you there!