How to Get to a Healthy Weight, One Day at a Time

Over the course of seven CFL seasons, Kyle Koch followed a steady schedule each week: Workout, practice, snap a ball, block like a boss, repeat. So when that routine went away after he retired in 2014, it’s hardly surprising the former offensive lineman saw his weight spike. Within a few months, he went from his playing weight of 310 pounds to 325 pounds. He knew he had to make a change.

When Life Gets In the Way 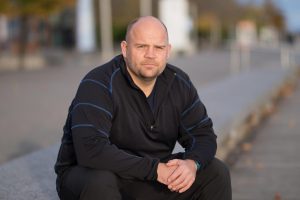 Kyle’s “roller-coaster” began while he was working on his MBA at the University of Toronto. To bring his weight down he hired a coach, bought a pair of running shoes, and hit Toronto’s paved running trails. That spring, he ran his first 10 km race. That fall, he completed his first half marathon. In a few months he’d lost over 50 pounds.

That’s when life got in the way. “After I ran the half, (training) became a little more casual. I was so busy in school. I just couldn’t do the training that I did before because I was too busy. I didn’t really take care of my diet at all. I was running so much that it didn’t really matter what I ate, and I didn’t realize that. When I stopped, or went back to a much more normal routine, I started to gain some weight back.”

With his MBA complete, Kyle started working as an investment analyst. The pace of his life didn’t slow down, and gradually his weight crept back up again. This is something many of us deal with: Our minds and bodies want to exercise, but commitments and distractions keep piling up.

The trick for Kyle: Getting back on schedule. These days, he records his workouts and diet on a calendar on his fridge. “It sounds like a little thing, but I just check the days off. I have a goal: I want to get at least three heavy-breathing, sweaty workouts in per week, six out of seven days of breakfast per week, and as many days without sugary foods as I can.”

This easy strategy is applicable to any of us busy guys who often miss meals or think we don’t have time to get some exercise.

“It’s been a bit of a roller-coaster for sure, but at least (my weight) is coming down steady now,” Kyle says. “That’s what’s important. It’s changing your lifestyle with small steps to get to a healthy weight.”

Steady As She Goes 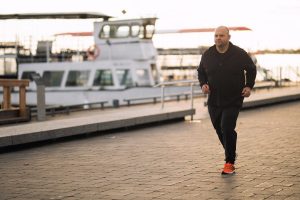 Kyle still gets out on those waterfront trails twice a week, but his focus isn’t on racing or on quickly shedding pounds. He wants to keep the weight off with a steady, healthy lifestyle.

He has re-prioritized his life over the last year to focus on three things: “One is exercise, one is breakfast and the other is limiting sugar intake. The running helped me get it off in the first place but I didn’t change my lifestyle. For me, it’s about being able to sustain weight loss over long periods of time. I was at a wedding this weekend, and as you can imagine there was some drinking there, and eating is always good, but I don’t worry about it because I have a plan that I can follow.”

Kyle has added yoga and meditation to his weekly running routine. The pounds aren’t peeling off like they did a few years ago, but this time he wants those gradual changes to become lifelong habits. “I’m not in a rush. I don’t want to just take on a crash diet or something like the half marathon again. I actually want to build a lifestyle change.”

Inspired by Kyle’s story? Click here for 3 simple steps to keep your weight in check at DontChangeMuch.ca!

In partnership with the Canadian Football League Alumni Association