Stand Up For Men’s Health Paddle a Success! 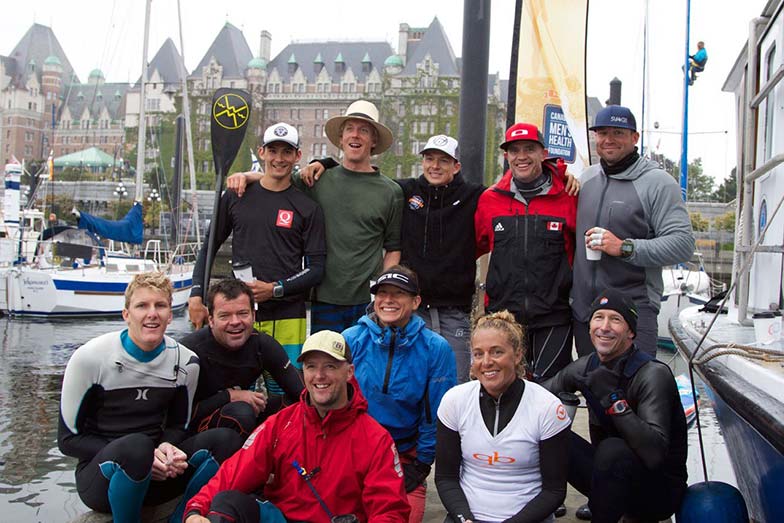 9:45AM – Victory! The team arrived at the G Dock inside the inner harbour, directly in front of the Empress. With a solid current pushing the entire way, we were able to make amazing time. A small group of friends, family and supporters were there to great the paddlers as they took their final strokes today, all lined up shoulder to shoulder in solidarity for this great cause.

They were jubilant, exhausted, and very happy to hear there is a hot tub at the hotel. This afternoon will be about reflection on an epic challenge that will hopefully help put men’s health front and centre in many peoples minds.

For now, the team will pack up and enjoy some of the fresh salmon that was caught by Erin, the support boat captain from Ogden Point Dive Centre who piloted the group the entire way. Salmon, coffee, hot shower and a nap – in that order.

9:35AM Way ahead of schedule, the paddlers have just entered the harbour. No breaks today, fighting the cold, they’ve pushed straight through. Should hit the dock in 15 minutes or less.

9:20AM Could land as early as 10:30. The winds have dropped off and we are making great time. Hot showers and a nap are imminent!

8:15AM We are making great time. The crew is currently off Oak Bay, an hour from Trial Island. The wind has dropped off and the current is working in our favour. It’s looking like we are going to arrive earlier than expected. It’s a combination of favourable conditions and a group desire to reach home port after this 140 KM journey!

Up at 3:45 AM for the final day of the paddle. Coffee, breakfast burritos and rain. Lots of rain. The group decided to tackle this final leg early in hopes of beating the wind and catching the current. With the support boat packed, everyone hit the water just before sunrise, the prone paddlers with gloves on for the first time. Hoping to get ahead of the weather. It was blowing 25 knots off Ogden Point at cast off but has dropped significantly. Fingers crossed it stays that way.

5:30 PM Land-Ho! The crew arrived into Island View campground on the Saanich Peninsula, well over 2/3 of the trip complete. Shortly thereafter the food arrived and the team settled into sharing stories about the journey. The mood is up and with hours before bedtime, this is going to be a great time to catch up.

3:00PM Just set off from lunch for the final 10 kms. The group is feeling refreshed and recharged. Also, we’ve been joined since this morning by our biggest fan, Ron, a kayaker from Burnaby who came to our camp last night and has managed to keep up with the group all day!

1:30PM The group just took a quick break and a baby seal jumped up and took a breather on Jack Bark’s prone paddle board!

12:30PM The prone paddlers are too cold and need to go faster to keep warm so we’re hopping in the zodiac and are going to escort them across Morsby Pass. The rest of the group is keeping pace behind.

11:20AM Just took our first break off Saltspring (Beaver Point) in lee of the wind. The group refueled with power bars, water, a bit of banter and some jokes. Spirits are high and we’re setting back out for the next leg! The Californians still want some salmon.

9:00AM Day #2!  Blisters, cramps, coffee, breakfast… And we’re off.  The team is currently pushing through between Galiano and Salt Spring Islands, pushing straight into a 13 knot wind with a tail current of 6 knots. Spirits are high. The California contingent wants to troll for salmon. Should make lee of Salt Spring in less than 30 minutes — then it’s smooth sailing!

6:30 PM – Arrival. 70 kms of straight paddling across the Salish Sea, and just before land, the wind died off and the sun came out – fortunately. The previous few hours had been a battle, with a tide running against the group, dropping their speed down to 1 ½ knots an hour (at that pace, they’d still be only about halfway across and there would have been way more profanity). Waiting at the dock to greet everyone were Whitfield’s two daughters, his mom Linda, and his dog Mack, who nearly busted out of his leash at the sight of the group limping toward the dock.

There wasn’t a lot of fanfare in return from the side of the paddlers – mostly just a collective sigh of relief and a lot of comments about food. “I’m hungrier than I’ve been in recollection,” Duff Gibson joked as he knocked back the “best cookies” of his life. After a solid 12 hours paddling, the group was decidedly excited to make camp, but didn’t really have the energy to show it. Most wandered onshore, dragging their boards to the campground, then fell into chairs.

At this point, they started feeding and rehydrating and mentally preparing for tomorrow’s paddle, which is a mere 40 kms. This is when it’s important to fuel. The group (which is both men and women) is constantly thinking about their intake, making sure they avoid dehydration. Most men, in the general population, don’t do this. It’s a hugely important thing to do – to drink 2.5 liters of water each day – but most barely have a glass. If there was something simple you wanted to do to start making a change in your life, this might be the best way to start.

A couple glasses of water here and there helps with digestion, provides energy and keeps a person feeling sharp. It’s a little change that will pay huge dividends. For now though, the point is for these paddlers to keep topped up so they are ready to tackle the tomorrow.

5:50PM Everyone safe and sound at Montague. Day one done, success!

2:00PM Through Porlier Pass where tide was running against us.  Two of the young guys paddled through the tide and the rest carried their boards across Race Point.  Great team effort!  All the paddlers are back in and paddling again!

12:30PM 7 hours, 48.5 km, and across the Salish Sea! Paddlers rest and lunch at Dionisio Point. All paddlers back up for next leg through Porlier Pass and 18km down to Montague Harbour, Galiano Island for the night.

We’re seven hours into this three-day journey and have just pulled into a small beach on the east side of Parlier’s Pass, on the north end of Galliano Island. It’s calm and if you hadn’t just been in the middle of the Salish Sea between Vancouver and Vancouver Island where the swell kicked up and knocked paddlers off their boards at random while they fought headstrong into the wind, you might mistake the group on shore as out for a quick excursion, sunning themselves and laughing on the beach.

But dig a little deeper and you’ll find out pretty quick that this is no small endeavor. Led by Olympian Simon Whitfield, the group is paddling a total of 140 kms over the next few days. Some of the paddlers have done this type of thing before. Some are relatively new to it. Either way, the mental strength it took to take those first strokes at 5:15 am, knowing what lay ahead, is something worth thinking about.

“It really is about just starting the trip and not worrying too much about how far or long it is,” said Whitfield when speaking about the journey in the days leading up to it. “It the same thing for men’s health – you don’t need to think about how long it will take. You just need to start, even if it’s something small.”

Stand Up for Men’s Health was put together as a way to raise awareness for the Canadian Men’s Health Foundation and their campaign, Don’t Change Much. The idea behind the initiative is to get men in their 30s, 40s and 50s to start making better choices about their health. It’s important. Men are way less likely to be pro-active with their health than women and have suffered because of it. As an example, men are 29% more likely to be diagnosed with cancer – and 40% more likely to die from it – which is in part due to the fact that they are also 24% less likely to visit a doctor than women. But, they also typically don’t like being nagged or told what to do. Men just need some reasonable nudging in the direction of health, hence, Don’t Change Much.

“It’s incremental changes like deciding to have a salad instead of fries, every couple of times the choice comes up,” says Whitfield. “Or just one less beer at the pub.”

Eventually, those choices become habit and have a lasting impact on one’s health. But you have start somewhere, like these crazy maniacs paddling across the Salish Sea. It all started with one stroke of a paddle, and despite some harrowing, grinding moments in the middle of the Salish, they’ve gotten to somewhere they’re happy to be. And they have about 45 minutes to enjoy it before we set off again for a few more hours…

11:30AM Update: One paddler forced out by chronic hand injury. All the others are looking good. North West waves are starting to kick up as the tide turns and starts to run against the paddlers. Still making about 5.5 km/h two-thirds of the way there already.

9:30AM Cape Able. “Halfway across Georgia strait. Wind has started to pick up – 3 foot seas – so conditions are challenging but the paddlers are doing great. Running ahead of schedule.”

7:30AM Entering the shipping lanes like it was no big deal…

5:30AM The stand-up paddle borders left English Bay this morning at 5:30 AM in near perfect conditions! They started off making almost 5 km/h and hope to cross the Salish Sea before the winds pick up and tides change. Make sure to follow their challenges on Twitter with the hashtag #SUP4MH.