Would You Go This Far to Save Your Friend From 400 Pounds of Poutine? 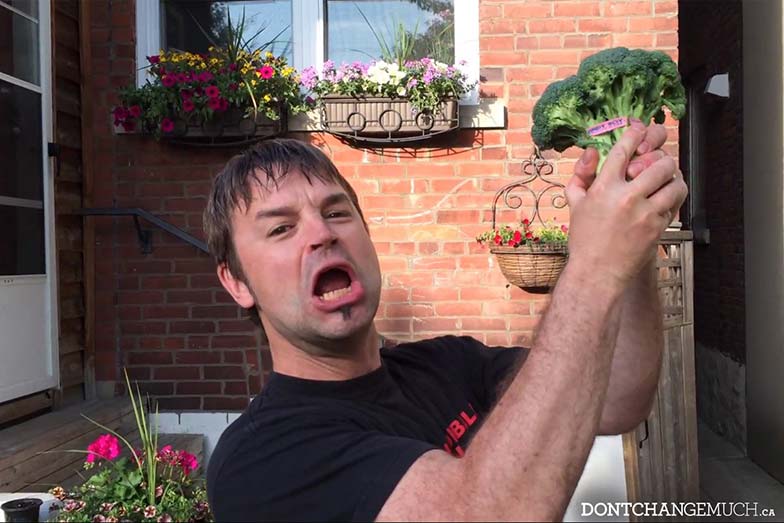 Have you taken the Canadian Men’s Health Week pledge yet? If so, well played. But you can still kick your pledge up a notch. After all, there are pledges, and then there are throw downs.

“Take the Pledge” highlights the difference nicely. The campaign at the core of the second-annual CMHW calls on guys across the country to commit to making four simple lifestyle changes that can help them feel better and live healthier lives: Take the stairs instead of the escalator, choose salad as a side dish, get off the bus one stop earlier, and eat more broccoli. One click or tap at CanadianMensHealthWeek.ca is all it takes for men to take the pledge.

But it doesn’t end there. Guys can take their pledges into throw down territory by recording selfie videos and challenging friends and family to embrace stairs, short strolls and salads. (Men’s health Champions Simon Whitfield, Trevor Linden, Adam Kreek, Shea Emry, Alain Vigneault, Jim Hughson and Ned Bell are taking the lead on this; to see Hughson’s clip, click here.)

Like many men, I’ve always had a thing for throw downs: The classic “Throwdown in Motown” NBA brawl; the Rick James song “Throwdown”; Miley Cyrus’s “Throwdown Hoedown”…okay, maybe it’s just Miley with that last one, but regardless, there’s something compelling about drawing a metaphorical line in the metaphorical sand or dumping water on yourself à la Ice Bucket Challenge.

The key to any good throw down is choosing the right adversary. If the Pacers’ Ron Artest had gone after Pistons coach Larry Brown back in 2004, for instance, the melee might not have been quite so spectacular.

Who, then, should I challenge to “Take the Pledge”? The leading candidates:

1. My firefighter friend Matt: Instead of sliding down that pole all the time he could take the stairs, right? Such a slacker…

2. My brother Luke: He’s been living in Scotland for nearly 10 years now, so I’m sure he has haggis as a side dish most of the time. How about choosing salad, bro?

3. My father-in-law: Just because he bought a new Nissan Sentra doesn’t mean walking goes out the window (even if the bus does). Park that Old Man-mobile and walk, dad!

In the end, however, I’m going to play to my strengths. I am a big fan of broccoli, after all, so I can walk the walk with ease by challenging:

4. My buddy Michael: How he stays so slim and trim is beyond me. I have seen Michael eat more poutine than is legal in most Canadian jurisdictions. (Heck, he owns a T-shirt with nothing but the word “poutine” emblazoned on the front.) An entire package of shortbread cookies is nothing to him! His smoked-meat sandwiches have their own weather systems. But have I ever seen him focus his gluttonous genius on vegetables? Eat more broccoli, my friend, and you won’t balloon to 400 pounds when your pact with Satan expires…

Also, use the #MensHealthWeek hashtag to find videos from other guys on Twitter. And be sure to share this post with your own buds who want to “Take the Pledge” and fashion a throw down of their own…