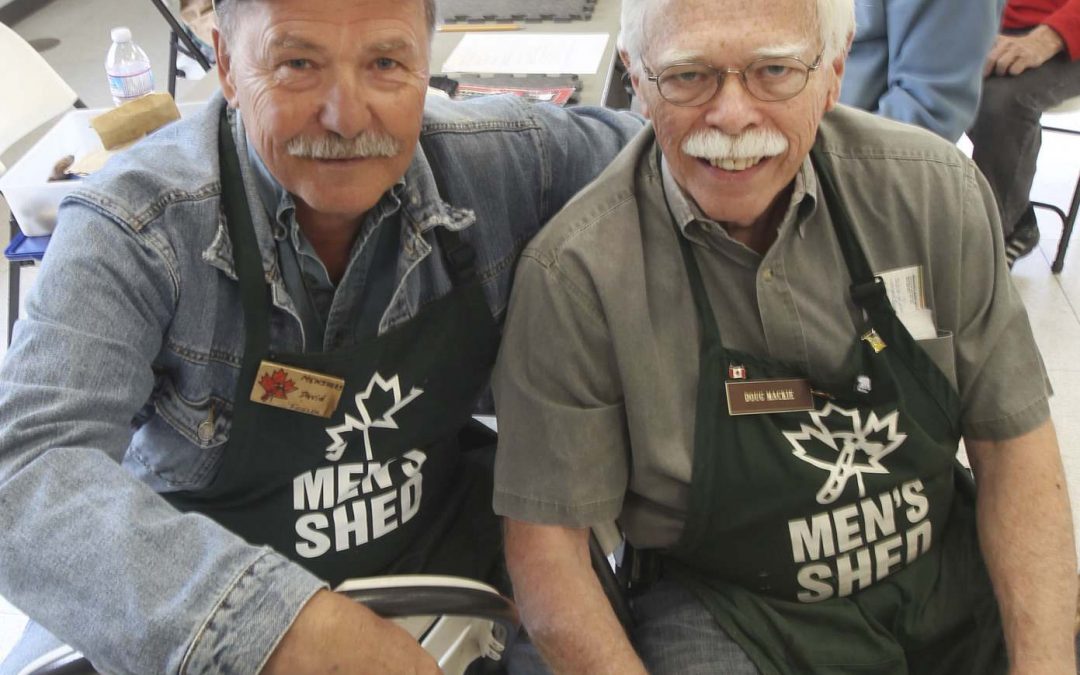 The hum of conversation at Woodhaven Community Club on a Wednesday afternoon in St. James is like a sweet melody to Doug Mackie’s ears.

That’s because it’s a telling sign of success for a program he helped launch in Winnipeg about five years ago that brings together retired men to socialize, volunteer and dabble in hobbies from whittling walking sticks to repurposing old teacups into bird-feeders.

“Look at the guys, just chatting there,” he says, waving toward the bantering men working shoulder-to-shoulder on various projects at a half-dozen or so folding tables.

“A few years ago they didn’t know each other.”

Today the men are not merely friends, they’re a community and part of a growing movement called Men’s Sheds. Originating in Australia, Men’s Sheds is a fast-growing initiative providing men, mostly retired, with a venue to socialize and, along the way, feel comfortable enough to discuss their own health and happiness.

If it were, the Men’s Shed movement would probably not have taken off as it has, he adds.

“Instead it’s health by stealth.”

And it’s a winning formula. Since the first one began Down Under in 1998, several hundred have sprung up across Australia and elsewhere.

The Woodhaven Shed in Winnipeg — presently the only one in Manitoba, though others are in the midst of starting — was founded in 2011 and was North America’s first Men’s Shed.

While the Sheds’ function is uncomplicated — loosely organized clubs where men socialize — their importance as a social determinant of health should not be discounted.

They haven’t gone unnoticed in the health-research community, says psychologist Corey Mackenzie, a professor and director of the Aging and Mental Health Laboratory at the University of Manitoba’s Centre on Aging.

Besides being widely studied in their place of origin, and receiving millions in government funding, Men’s Sheds have also been the focus of researchers in Canada, including here in Winnipeg. Shortly after it launched, U of M grad student Kristin Reynolds published a research paper examining the Woodhaven Shed’s positive impact on aging and socialization.

And recently, the Aging and Mental Health Lab worked with the local chapter to develop a toolkit to help other communities launch sheds.

“It’s really important to emphasize these (Men’s Sheds) are not health- or mental-health focused programs,” Mackenzie says. “The focus is on getting guys together to do whatever they want to do that they find enjoyable.”

This sense of purpose and belonging, however, is often essential to well-being. And many men struggle to find both as they become increasingly grey.

“This often has to do with the fact that many men — especially those of an older generation — define themselves by what they do for work,” he says.

Because their job is their social network, they can become isolated after retiring, which can have a negative impact on well-being.

Although it’s intuitive that social bonds are fundamental to good mental and physical health — and there’s plenty of research to support this — retired men generally struggle to stay connected because of the social constructs that define masculinity.

“There are a bundle of characteristics that make a man a man,” says Wayne Hartrick, president of the Canadian Men’s Health Foundation. Risk-taking, competitiveness and stoicism can be helpful traits in certain circumstances, but they often have negative implications when it comes to health.

These traits can make men less likely to discuss how they feel, emotionally and physically. And men are often less inclined to ask for help because of an underlying sense it’s a sign of weakness, he says.

“Basically, men are winning at the bad-health-care game, and there’s a certain amount of this that is preventable by guys being more proactive about taking care of themselves.”

Statistics bolster this notion across many different health problems, from heart disease to diabetes.

From a mental-health perspective, men are about four times more likely to commit suicide than women, and men over 50 are among the most at-risk demographic, Hartrick says.

While the camaraderie of sheds is not a panacea for well-being, connectedness is crucial, particularly for mental health.

“It’s probably one of the strongest effects in all of mental-health research,” Mackenzie says. “It’s that super-strong connection between good mental health and social connectedness.”

And that’s why Men’s Sheds can serve an important role in an aging society.

Simply by providing an opportunity to get together, the sheds offer health benefits that fly under the radar, says Dave Friesen, 67, who helped start the Woodhaven Shed.

“We don’t really promote the health component to our guys as a drawing card, but the health part of it comes as serendipitously with the camaraderie and all that.”

Friesen says it’s common for new members to seem reserved at first, but as they work side-by-side with other members on projects, they open up. He adds he’s known members who barely said more than a hello for weeks and then they reveal they’ve been diagnosed with cancer.

“That gives me an opportunity to chat because I’m a two-time cancer survivor, so I can say ‘I have survived cancer,’ and then it opens the door.”

Mackie, who lives alone, can definitely attest to the Woodhaven Shed’s value. It has become an integral part of his life.

And the shed has turned out to be a deep well of support.

“I received more hugs, cards in my mailbox and men reaching out to me than I could have ever imagined,” Mackie says. “Instead of everything being bottled inside, I’m able to talk about her death — not in great detail — but at least I can talk about it.”