BC Comic Toby Hargrave shares how small steps help him ‘chill out’ about his health.

Find out how he starts with little change that can result in a domino effect.

Small steps help B.C. comic ‘chill out’ about his health

What's So Funny About Men’s Health?

Watch the short film that follows Toby as he confronts the possible repercussions of decades of excess.
Toby Hargrave and his Grade 11 classmates were nearly finished a 1,300-kilometre bike ride through the Rocky Mountains when he experienced first-hand how quickly an ordinary day can nosedive into disaster. The journey had started in Jasper, Alta., continuing south into Montana. On a downhill section of the highway, going 60 kilometres an hour, Hargrave ran over a piece of wood that sent him careening into a tractor-trailer parked on the side of the road. He awoke in hospital with no memory of the accident. His wounds, ranging from a severed patellar knee tendon requiring surgery to spinal injuries and facial lacerations, proved to him that he’d had a very close call.

Shortly after the accident, Hargrave learned something else: That the healing process is slow and the body must be treated with respect in order for it to regain normal function. When Hargrave undertook the bicycle trek, he was one of about 100 teens attending the now-defunct St. John’s School of Alberta, a strict, traditional private school for boys that emphasized rigorous outdoor activities. Hargrave was used to competing in school snowshoe races ranging from 55 to 90 kilometres in length, but after the accident he was in a wheelchair for nearly five months. When he resumed walking — and in order to prove he wasn’t a “wimp” — Hargrave took part in a snowshoe race before he was truly ready. “That’s where I really messed up my knees,” Hargrave confesses. “I messed up my other one by favouring my injured leg, and so that was the start of the slow decline.”

As it turns out, what Hargrave perceives as a “slow decline” hasn’t been all that bad. The actor and stand-up comedian lives with his young family on British Columbia’s Sunshine Coast, with Hargrave, 44, being about as close to an everyman as it gets. Describing himself as “spectacularly average,” he carries about 265 pounds on a six-foot frame. Like many Canadians, he has spent most of his adult life drinking alcohol, especially wine, almost on a daily basis. Hargrave wears the apron in the family, with his culinary repertoire leaning towards “colourful renditions of comfort foods like ribs, roasts and pierogies.” Counting calories? What’s that? Exercise? Who has the time?

About a year ago, following the birth of his second child, Hargrave couldn’t shake off a sense of fatigue that felt like it was settling into his bones. Looking in the mirror, and “tired of being tired,” he began to worry. How healthy — or unhealthy — was this burly, bearded man staring back at him? The next logical question: What course of action should he take? A medical check up — blood pressure measurement, triglyceride, cholesterol and blood glucose tests, waist circumference and BMI measurements — was in order.

Hargrave is glad he underwent the tests. Not because anything sinister was discovered, but because he discovered that he’s okay, despite a lifestyle that many medical experts would frown upon. This, at least, was a huge weight off his mind, as well as motivation to take steps to maintain his good health. “It’s freeing when you have all this information that you need to know,” Hargrave says. “I’m not saying I don’t have to worry about my health, but I’m now not worried that my liver is about to fail. I’m not worried I’m about to develop Type 2 Diabetes by next week.”

About the same time that Hargrave was musing on mortality, he was approached by the Canadian Men’s Health Foundation (CMHF) to appear in a documentary exploring the fears and anxiety many men experience when it comes to medical health checkups. Titled What’s So Funny About Men’s Health?, the short film follows Hargrave as he confronts the possible repercussions of decades of excess, and explores the steps he could take to become healthier and feel better.

“I realized that I might be doing something right,”

In the documentary, Hargrave meets CMHF Champion Adam Kreek, an Olympic gold medal-winning rower. Kreek helps Hargrave navigate CMHF’s YouCheck online survey, which helps men establish a baseline for their health. Hargrave also meets Ned Bell, a sustainable seafood ambassador who is the Vancouver Aquarium’s Ocean Wise executive chef. Bell nudges Hargrave away from his favourite section of the grocery store — the meat department — and into the seafood section, encouraging him to expand his culinary range while focusing on adding more vegetables and fruits to his family’s daily diet. When Hargrave’s four-year-old daughter recently asked for a second helping of asparagus, “I realized that I might be doing something right,” he says.

The half-hour documentary focuses on Hargrave’s day-to-day food and exercise choices, and how these can be improved with small changes. Were it longer, it might also have explored another issue that Hargrave feels is integral to men’s health — depression. He recalls a period in his life, in 2012, when both his career and relationship hit a rough patch. Unable to shake off a sense of deep gloom, Hargrave was unable to roust himself from bed. “I went down a rabbit hole,” Hargrave recalls. “I never did seek help and that’s too bad, because it’s a lonely way of dealing with things. But it’s typical for men who grew up in the 1970s and 1980s.”

Hargrave denounces the veneer of machismo that men are expected to show the world, and points to this as the reason he raced 55 kilometres on an injured knee. The long-term result? His knees never fully recovered. Men, he says, are burdened to uphold outdated stereotypes that they must be strong, they must provide, they must be masculine and macho. “Sometimes it just feels like there’s too much to fix. You don’t know where to start, so why bother getting out of bed?”

Hargrave points to another societal demand that he believes prevents many men from being proactive about their wellbeing: The buying and selling of health. Rather than learning how to weave healthy habits into one’s lifestyle, a consumer society conditions men to believe that good health requires the purchase of special food products, the latest technological gadgets, and an expensive gym membership. The pressure to buy one’s way to good health ends up being a deterrent, he says, and overwhelms the real message that you only need to tweak your lifestyle in order to be healthier.

Today, thanks to informative chats with Kreek and Bell, and recommendations from a physician about diet and exercise, Hargrave is striding down the path of optimal health. He has “rediscovered salads,” and makes meals that incorporate ingredients like pita bread, small amounts of feta cheese, tomatoes, olives and chicken. “After you’re done eating,” he quips, “you don’t feel like you ate a bowling ball.” He has also slashed his alcohol intake, and swapped sugary soda pop for water. 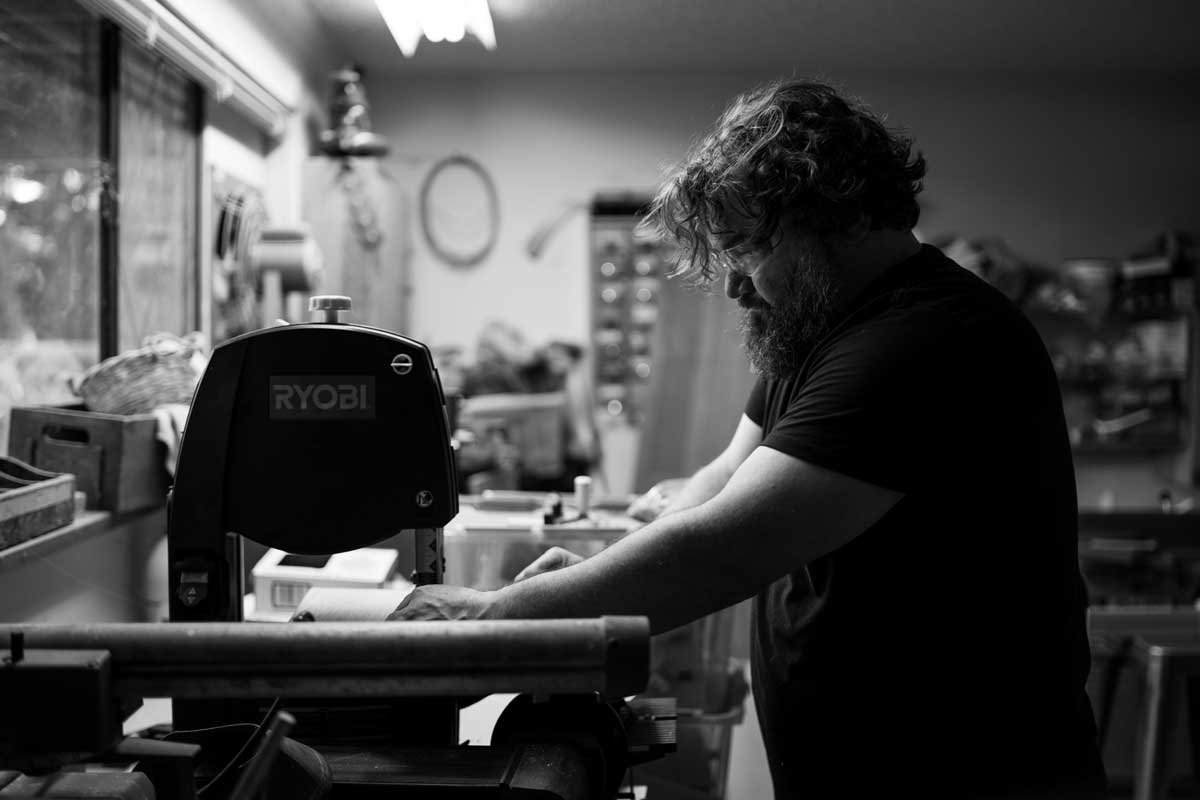 Today, Hargrave doesn’t worry about his weight, although he suspects he’s lost some pounds simply by going on long walks in the evening with his family, and working on his half-acre property doing home renovations and undertaking projects like building a new deck.
Hargrave’s main message to men? “Chill out” about your health, he suggests. Make changes, but make sure they are easily manageable — like the ones covered in this Don’t Change Much blog post. “Start with a little change that isn’t a big deal and enjoy that process. That one small change can be like the domino effect, leading to much larger changes in the future.”