Looks and feels better, is inspiring others to live healthier, and has even saved money on basement renos!

“I started putting on weight really fast, and when I hit 300 pounds I realized it was time to see my doctor”

You know those cars that are parked at the very edge of the lot? One of them could belong to Allan Laplante.

Putting some extra distance between himself and the office, shop or supermarket is just one of the many small changes the married father of two has made since receiving a wake-up call from his family doctor.

The Ottawa resident’s inspiring story begins with tragedy. Six years ago, Allan sustained second- and third-degree burns in a house fire. While recovering from the traumatic experience, he recalls, he was cooking some food on the stove when he was hit by what he thought was a heart attack.

He was rushed to the hospital, where medical staff delivered some good news: It wasn’t a heart attack. The bad news: a panic attack had been triggered by a mix of post-traumatic stress disorder, acute anxiety, and depression. He was prescribed various medications, which have proven effective in treating these conditions. Trouble was, the medications also caused Allan to eat, drink alcohol, and smoke cigarettes obsessively.

“I started putting on weight really fast, and when I hit 300 pounds I realized it was time to see my doctor,” the 39-year-old social worker recalls. “The doctor told me I’d be diabetic in a month if I didn’t lose weight and change my eating and drinking habits. I started thinking about my family, about how much they need me, and that scared me enough to quit drinking and smoking, and to start getting back to being healthy.”

When he shared his health concerns and goals with family and friends, Allan realized just how much support was all around him. “They told me about their own efforts to live healthier — what works and what doesn’t — but the best piece of advice was that nobody else can do this for you. You’ve got to do it yourself.”

The writing was on the wall well before the doctor’s diagnosis. While climbing stairs, Allan had already noticed that he had to pause between steps. His joints ached. Running was out of the question. “I’d never had these issues in my life,” Allan says. “I was like, ‘I can’t believe I let myself get to this!’ I didn’t like the way I looked physically, I didn’t like the way I felt. It was time for change.”

The squats that started it all

Change began with the simplest of exercises: squats. “I knew I needed to start breaking a sweat and be more physically active, but at my weight the only thing I could do was squats. So I just started bending my knees and coming back up again. I did 10 squats while washing dishes, or preparing food, and it just kind of snowballed from there.”

Squats are still a key part of Allan’s exercise routine, but now he uses them to warm up for the sets of pull-ups and planks, as well as treadmill and yoga sessions, that have helped him lose more than 50 pounds.

For Allan, staying active isn’t just about going to the gym. “Parking further from the grocery store or the mall so I can walk there is something I don’t even think about any more. I just do it naturally. Friends ask why I park so far away, and I just tell them this is how I do it now.”

Likewise, there’s more to the benefits of healthier living than looking and feeling better. Just look at Allan’s blinged out basement! “Before, we would have paid someone else to do the renovation work. Now, picking up a pack of 25 floorboards, and going up and down the stairs all day, aren’t issues for me. I can do the work myself and it’s a great workout, so why pay someone else to do it?”

The same goes for many household chores: By doing them more quickly, or adding extra moves like the ones covered in this Don’t Change Much blog post, they can be turned into exercise.

You are what you eat and drink

Two more small changes — snacking on almonds and walnuts, and drinking plenty of water throughout the day — have helped Allan quit smoking and drinking. “It keeps my mouth busy whenever I have a craving. I wasn’t able to breathe properly before, so I quit smoking and I’ve been able to sustain that. I don’t crave it, and to be honest I can’t stand it now.” 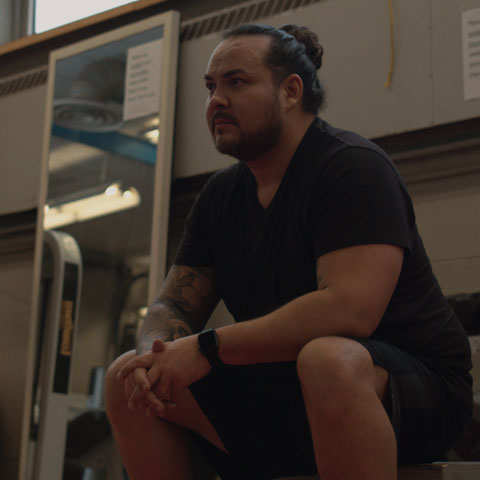 At the same time, he has reduced his intake of sugar and salt, and has started eating more fruits and vegetables. Allan’s healthy-eating secret weapon: The smoothie. “I wake up, have a coffee, and throw a bunch of plant-based proteins into a blender with some greens and strawberries, blueberries, bananas, whatever I have around. If it’s going bad, I throw it in!”

At dinner, he jazzes up vegetables like broccoli by grating Parmesan cheese on top, or adding a bit of hot sauce to brussels sprouts. “With some wild rice and lean chicken, fish or steak, these veggies taste amazing!” 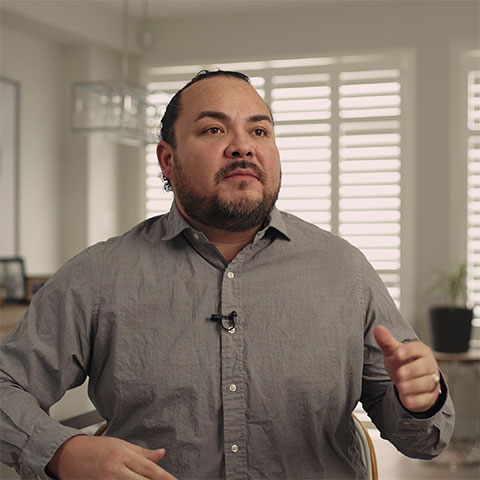 As a young man growing up in Saskatchewan, Allan pumped iron to impress others with his muscular physique. These days, his workout style, and his perspective, have changed.

“Now it’s more about being healthy enough to do everything I want and need to do. Like carrying both kids up the stairs, renovating the basement…being able to increase the quality of my life, and being there for everyone else, is motivation enough for me.”

As well as learning how to live healthier and happier, inspiring others to make healthy changes has sent Allan’s confidence soaring. “It’s like a chain reaction: you start doing better, and people want to be part of that positive energy. My neighbours who used to smoke with me don’t smoke anymore. Now we talk on our front lawns with a coffee.”

Then again, he jokes, being a role model does have its downsides. “One of my neighbours said to me the other day, ‘I like what you did with your basement. Maybe you can come and do mine!’”