What is prostate cancer?

Prostate cancer is a malignant tumour that forms in the prostate gland. A man may not experience any symptoms, especially in the earlier stages of the disease. Prostate cancer may be found by a PSA test or digital rectal examination. A PSA test is a simple blood test that measures the amount of the protein prostate-specific antigen. During a digital rectal examination, the doctor feels the prostate gland with a gloved index finger for any irregularities.

What are common symptoms of prostate cancer?

The most common symptoms of prostate cancer involve urination. A man may experience:

“Prostate cancer becomes more common the older a man becomes. If you really looked for it carefully and did biopsies in all men at the age of 80, you’d probably find about half of them have prostate cancer,” says Dr. Black. “Only a very small percentage of those men will actually die from prostate cancer, however, because it tends to be a fairly slow-growing disease.”

While it’s fortunate that prostate cancer is a slower-growing type of cancer, it can spread (metastasize) to other parts of the body such as the lungs, bones and liver. If you experience any symptoms of prostate cancer, or you’re due for prostate testing, discuss your options with a men’s health provider. 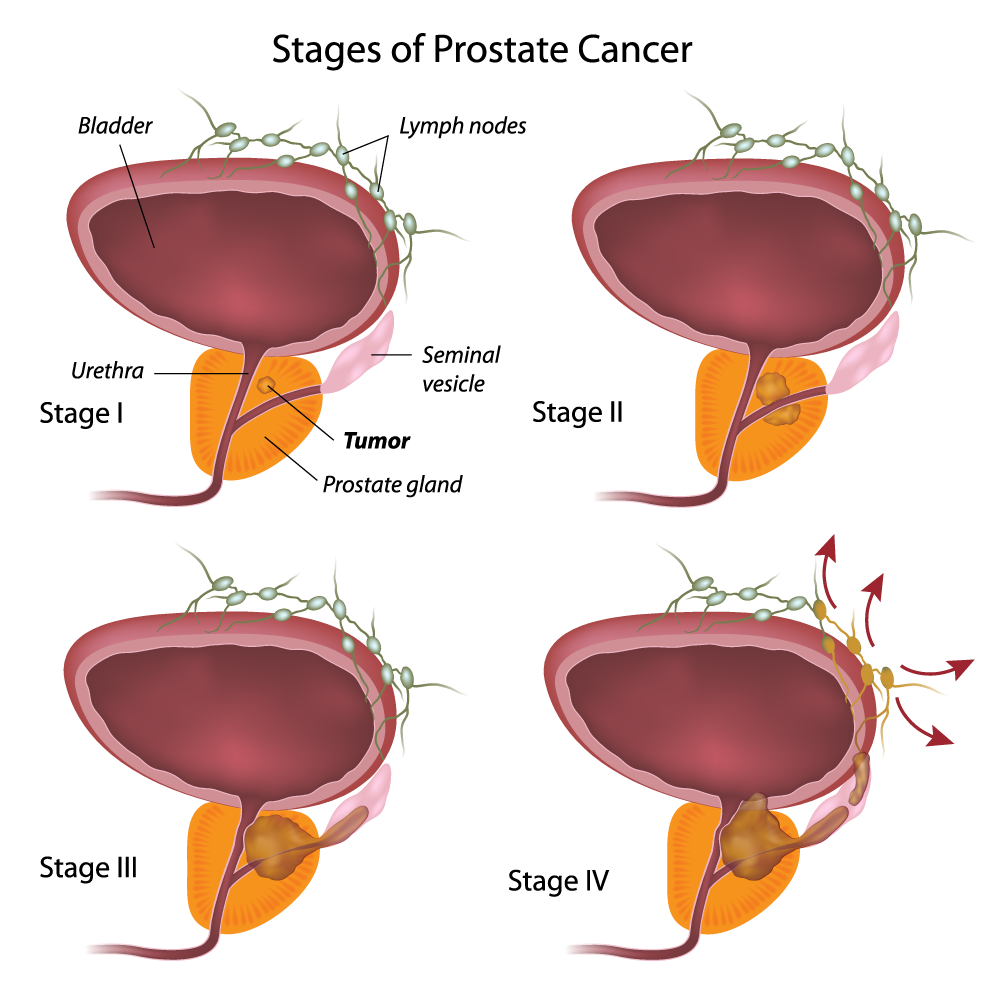 We’re constantly hearing news about cancer-fighting foods and supplements that can reduce your risk of developing the disease. But, with so many different reports and recommendations, how do you know which preventative measures are safe and effective, and which ones aren’t? The answer: proven research.

“One of the most common questions asked in regards to prostate cancer is “what can I do to reduce my risk of getting the disease?” says Dr. Peter Black, a urologist active in the Men’s Health Initiative of BC. “And, there are a lot of things that are being explored. There’s good data that some things, for example, lycopene, which is in tomatoes, and may help reduce the risk of prostate cancer.”
A study of over 40,000 health professionals showed that men who ate more than 10 servings of tomato-based foods daily (like cooked tomatoes and tomato sauce) had a 35 percent lower risk of developing prostate cancer than men who ate fewer than 10.

“There’s a new idea that a group of medications may help, and they’re called 5-alpha-reductase,” says Dr. Black. “They affect how testosterone is metabolized in the prostate. A couple of very new studies indicate that taking this medication may reduce the risk of getting prostate cancer, and that’s something men have to talk to their general practitioner about and see if it’s the right thing for them.”

However, remember that you can’t believe everything you read! There was a large study published recently that looked at the effectiveness of vitamin E and selenium in preventing prostate cancer.

“The general thinking is that something like that can’t harm, but the study actually showed that maybe it does cause harm,” says Dr. Black. “There’s an increased risk of prostate cancer in men getting vitamin E, and an increased risk of men getting diabetes in men taking selenium. So you have to be careful, and it’s wise to take things only where there’s good evidence that it actually helps.”

How do you prevent prostate cancer?

One of the most common discussions people have with their health care provider is about lowering their risk of developing certain diseases. Your doctor might recommend making diet and lifestyle changes, or prescribe preventative medication. If you have a higher-than-normal risk of developing a disease, chemoprevention may be a viable option.

“Chemoprevention is the ability to use medication to either prevent a process from starting, or prevent a process from progressing,” says Dr. John Warner, a urologist active in the Men’s Health Initiative of BC. “It’s a term that’s been used for many years in different areas. Some of the areas we’ve seen it in, for example, are lipid metabolism and heart disease – the use of lipid drugs will prevent heart disease. Or, even something as simple as the use of fluoride for cavities.”

“Chemoprevention is a new term that’s used in urology, because of several different papers and several different publications, which have come out recently that show that the use of these medications will prevent prostate cancer,” says Dr. Warner. “The two papers that have come out are known as the PCPT study and the REDUCE study. Both of these show that there is a 25% reduction in prostate cancer patients that take either finasteride or dutasteride.”

The Prostate Cancer Prevention Trial (PCPT) was a study done in men 55 years and older, to determine whether or not the drug finasteride could prevent prostate cancer. The PCPT was funded by the National Cancer Institute (NCI), and looked at 18,882 men over a three-year-period.

The Reduction by Dutasteride of Prostate Cancer Events (REDUCE) study was an international clinical trial that looked at 8,200 men ages 50 to 75, from 250 sites in 42 countries. Men younger than 60 needed baseline PSA values of 2.5 to 10 ng/mL, while men older than 60 needed values of 3.0 to 10 ng/mL to participate.

A great deal of research is needed to understand chemoprevention, which is why it is still in its early stages. Find out more about chemoprevention from health care providers near you.

How do you screen for prostate cancer?

“There’s a lot of controversy about prostate cancer screening,” says Dr. Peter Black, a urologist active in the Men’s Health Initiative of BC. “We do have a couple of tests: one test is the PSA – the prostate-specific antigen, which is a protein made by the prostate that is in the blood. Then, we have a rectal exam where the physician feels the prostate. Now, these tests do pick up prostate cancer, but they’re not very exact, so there’s a lot of controversy whether prostate testing is actually helping men, or just leading to more tests that may actually harm men.

“In general, the urologic community supports it, because we’ve seen with more prostate cancer screening that the death from prostate cancer has decreased. And, we’re finding more patients with lower-risk prostate cancer, so we’re finding it sooner.”
Traditional guidelines have been that after age 50, men should have a PSA test and a rectal exam each year, until they’re at least in their early 70’s. “At that point it becomes debatable again what the value is as a man gets older,” says Dr. Black. “The newer ideas are that you actually test your prostate-specific antigens at age 40 to establish a baseline. We know that that baseline level predicts the risk of getting prostate cancer later in life. So if it’s high at age 40, then you have regular testing thereafter. If it’s normal at 40, then you check it again at 45 and 50, and then go into routine screening.”

Are you at risk? Discuss PSA testing with a men’s health provider near you.

How is prostate cancer treated?

If you’re diagnosed with prostate cancer, what’s your prognosis? The prognosis for prostate cancer depends on a number of factors, but in general it is quite good, as it doesn’t spread as quickly as other more aggressive forms of the disease. In some cases, prostate cancer may not even need treatment.

“Prostate cancer is a very curable cancer,” says Dr. Peter Black, an urologist active in the Men’s Health Initiative of BC. “Only one in six men who get it dies from it. That is, in part, a reflection of the long course that prostate cancer takes; it’s a slowly-developing disease.”

The prostate gland is a small organ found in males, and one of its main functions is to help produce semen. The prostate is located right under the bladder and in front of the bowel, and the urethra runs through it, which is why many men with prostate cancer experience urinary problems.